This site uses its own cookies to improve your Internet surfing experience and that of third parties to send you online promotional messages with your preferences. For more detailed information and to change your cookie settings, click here. If you click on the “OK” key or if you continue surfing, you accept the use of cookies.

Rest of the World
×
Price:
Actual Price:
Our price is lower than the manufacturer's "minimum advertised price." As a result, we cannot show you the price in catalog or the product page.

You have no obligation to purchase the product once you know the price. You can simply remove the item from your cart.
Our price is lower than the manufacturer's "minimum advertised price." As a result, we cannot show you the price in catalog or the product page.

You have no obligation to purchase the product once you know the price. You can simply remove the item from your cart.

SANTA EULALIA 175. THIS IS HOW WE CELEBRATED OUR ANNIVERSARY

The year 2018 will always be remembered with joy, delight and a certain nostalgia for all the special moments we were able to share on celebrating our 175th anniversary. Our successful collaboration with the Catalan artist Antoni Miralda to pay tribute to Santa Eulalia's history has left an indelible mark on our memory and that of Barcelona as something exceptional.


ART AND FASHION CAME TOGETHER IN A SINGLE, UNIQUE EVENT

With the help of the artist Miralda, we celebrated Santa Eulalia's 175 years of history. The common thread throughout the celebrations was closely associated with the store's name, its origins and the ritual of dressing, involving all the people of Barcelona.

80 musicians and 150 students of drama, dance and design from different schools in Barcelona formed part of the Pattern Parade. They wore large figurative patterns representing iconic garments from Santa Eulalia over the past 175 years. The performance was inspired by processions and fashion shows, without being either one or the other. It started at Pla de la Boqueria, the place where Santa Eulalia first set up shop, and ended at our establishment on Passeig de Gràcia. The Parade marched up the Ramblas and Passeig de Gràcia. After covering almost three kilometres, the performance ended at our store with a unique lightshow.

Miralda adorned Santa Eulalia with a Dress of Lights made up of 50 patterns and over 20,000 LEDs that covered the entire facade of the store at Passeig de Gràcia 93, alluding to the martyred Saint Eulalia by recreating the saltire cross and skirt of snow that appear in the altarpiece The Crucification of Saint Eulalia (15th century, Episcopal Museum of Vic).

Antoni Miralda (Barcelona, 1942), the creator of the celebration

To celebrate our 175th anniversary we placed ourselves in the hands of the multidisciplinary Catalan artist, Antoni Miralda.

Based in Miami for several decades, Antoni Miralda is an exponent of ephemeral art and the food culture concept, becoming a cultural and creative icon on the 1980s New York scene with his "El Internacional Tapas Bar & Restaurant".

In 1988 he hosted the wedding between the Statue of Liberty and the Columbus statue as part of the "Honeymoon" project and has created various happenings for the streets of New York, Dallas, Paris and Kansas, among other locations

SOME OF HIS WORKS 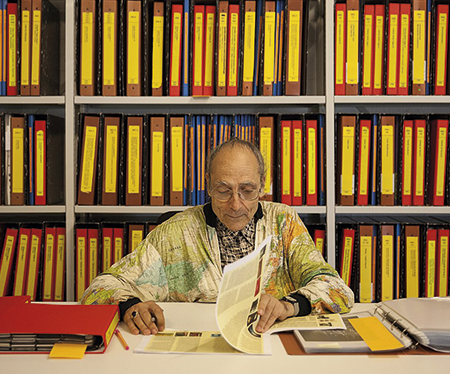 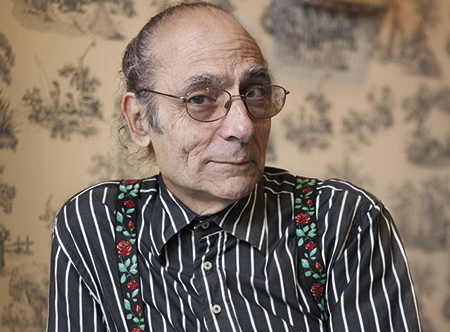 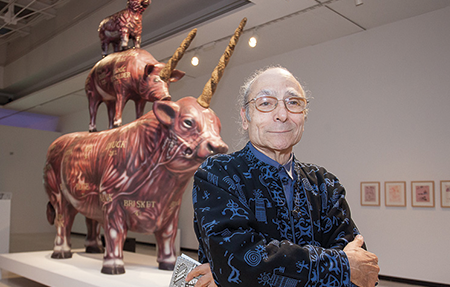 Some of his works

His first works, Soldats Soldés (1967-72)), is an assemblage of anti-military objects based on a collection of white plastic army men. 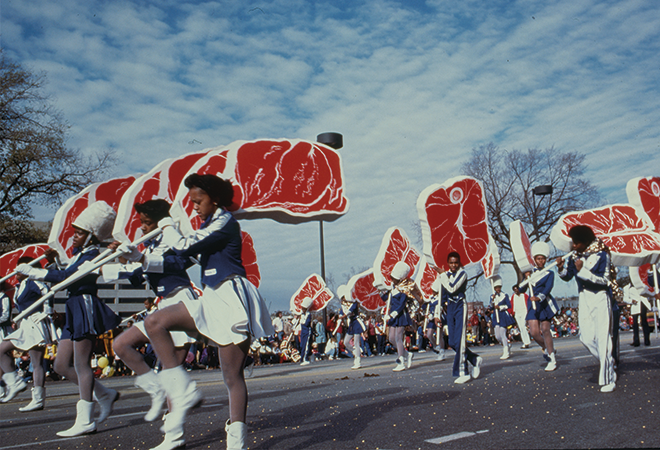 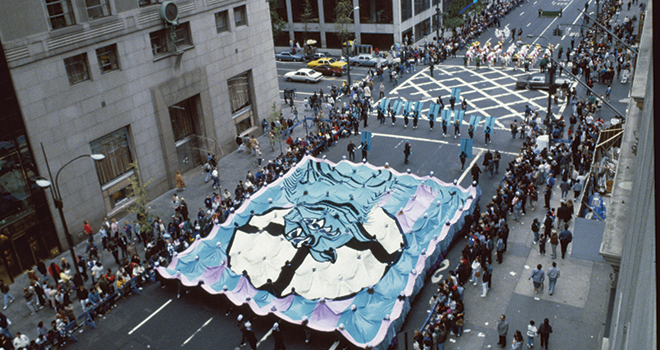 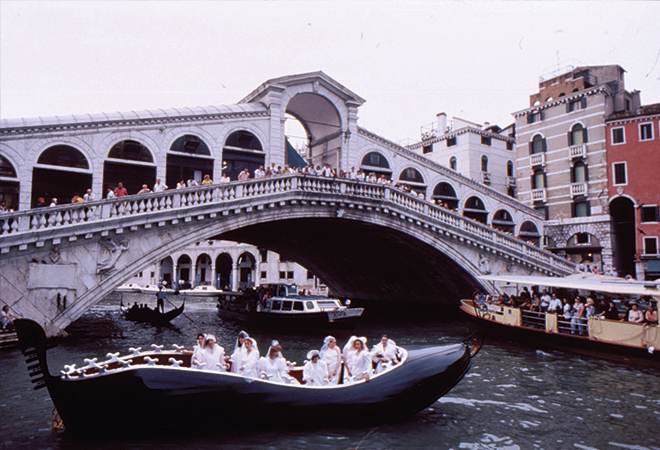 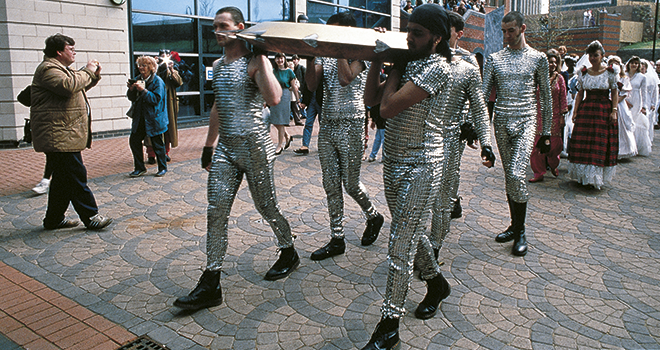 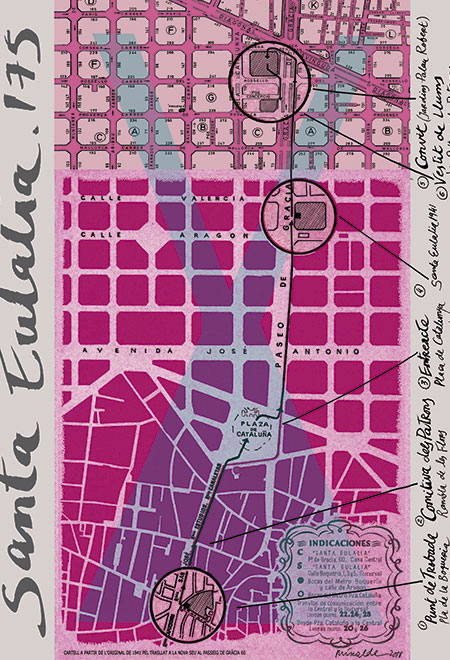 Miralda lived in Paris in the 60s, where he began to carry out projects such as banquets and rituals, introducing the ceremonial aspect of food as a creative element through colour and its symbolism.

He lived in New York between the 70s and 90s where his work focused on the public participatory space related to the edible. Highlights include Fest für Leda, Documenta 6, Kassel (1977), Labor Day Festa, Artpark, Lewiston, New York (1977), Breadline, CAM, Houston (1977), Wheat & Steak, Kansas City (1981), Santa Comida, New York, Miami, Paris (1984-89), the creation, together with Montse Guillén, of the renowned El Internacional restaurant in Tribeca, New York (1984-1986) and the Honeymoon project (1986-92), celebrating an imaginary wedding between freedom and conquest using the Statue of Liberty in New York and the Columbus Statue in Barcelona, exploring the cultural and culinary exchange between the New and Old World with interventions in New York, Barcelona, Venice, Tokyo, Paris, Miami, Las Vegas, Philadelphia and Miami, among others.

In 2010 the Reina Sofia Museum presented De gustibus non disputandum, a retrospective of Miralda's work in Madrid, while in 2015 the MACBA in Barcelona gathered together all his American projects in the exhibition Miralda Madeinusa.

The artist was awarded the Premio Velázquez de Artes Plásticas 2018 for his body of work from the 1960s up to the present day, in which "he develops the concept of ritual and festival with a playful and participative approach that demonstrates the political and critical nature of his work".

In 2015 the MACBA (Barcelona Museum of Contemporary Art) brought together all his American projects for the Miralda Madeinusa exhibit.